She sits on a little wooden chair, covered with blankets and towels. Although the sun is shining, she feels the cold wind. The hood of a windbreaker is held tight to her face by a large beach sarong wrapped around her head and tied under her chin. She looks like a painting of a man taking a nap or hiding under a large sombrero. From the side, you can’t see her face. From the front, you can see her nose. She is all bundled up.

The bikini-clad young women skip, hop, and prance on the sand. They laugh and fling their arms out, embracing the sun, the ocean, and this escape from their other life. They are goddesses, flitting bravely, confidently, uncaringly happy, dancers in a Matisse painting, their feet hovering above the earth.

They walk behind the bundled-up woman on the way to their claimed spot, taking great strides in the soft sand.

Another laughs and says, “I don’t know.”

“Me?” The woman stands, slowly rising from her perch. She stretches out her sarong poncho, like it is her wings. The wind catches the light material. It sails behind her as she rewraps it around her head.

“I am your fairy godmother.”

The three young women stop dead in the tracks.

“I am your fairy godmother. I am here to fulfill your wishes.”

They move closer to the old crone, laughing.

“I’m not sure you look like a fairy godmother.”

“You mean like those three silly women in Cinderella? The Disney cartoon?” she says.

“Well, now that you mention that, you do kind of look like them.”

“I don’t know what a fairy godmother is supposed to look like. But you have run into yours, right now. You are allowed to make one wish and I can grant it. But it has to be something you really, really want, from the bottom of your heart. I cannot grant the wish unless it is genuine to you and your heart’s desire.”

Their godmother laughed. Or was it a cackle? A snort? Each damsel heard it differently. They waited for an example and then realized, as she tied her cape tighter around her neck, that she was waiting for them.

“I’m ready,” another said. “I know what I would wish for. Do I have to say it out loud? Can’t you just read my thoughts?” She swooshed her bare leg into the dune, making swirls around her other foot. She glanced up at the old lady, hoping beyond hope that this was real and that she was going to have an incredible story to tell. She might as well just say it, what did she have to lose? She shut her eyes.

“I wish to be tall, with long legs, and blond hair.”

“Nope. Sorry. That is not what you really want,” said the witch. The girl looked crestfallen.

The second spoke up after thinking that her friend really blew it. You need to wish for something meaningful, she thought. Why waste the one wish you are going to get in this world on selfish desires?

She, too, shut her eyes. “I wish for world peace,” she announced proudly.

“Nope. Sorry. That is not what you really want,” said the crazy lady.

Everyone turned to the third lass.

She looked straight at this apparition; this blanketed body, this self-proclaimed fairy godmother and said, “I wish for a different fairy godmother.”

“Granted!” said the wise woman. She plunked down onto her wooden platform and gazed back out to the sea.

The three young women headed to their spot.

“Wow,” said the first one to the third one. “You got your wish. You are so lucky.”

The lucky one looked back at the bundle of blankets that was watching the departing group. She saw the twinkle in the woman’s eye. Did the old woman wink? The girl smiled and waved.

And it all, basically, came true. The first wisher didn’t grow tall with long legs and blond hair. World peace never happened. And there is still a fairy godmother out there somewhere for the third lucky one.

To Dig A Hole

I am on the beach. It is early evening and the sun sets over the land behind me, sparking the waves. I find I am alone, a precious moment, and then a handful of sand is tossed in front of me and a head pops up from a hole.

He is red-headed and round-faced. I walk closer.

“That is a deep hole,” I say. The boy has created a square around him, with straight walls, with a garden trowel.

“You can hide and spy on people,” I say.

He smiles and nods.

I don’t say anything. I’m thinking. How can I tell this gregarious child who is so proud of his efforts that the hole is a hazard, especially at night, and that he should probably fill it in. I don’t want be an old fuddy-duddy. How can I tell him in such a way that doesn’t engage me in his project for much longer? I’m on the beach, looking to be with the ocean only and silently.

“Well, you don’t want anyone to fall into it.” I just say it. He doesn’t respond. It is his turn to think. I wave good-bye and walk to the water’s edge and then down the beach, on the hard sand of low tide.

When I return, I hear him talking as I walk past. I hear the scraping of the trowel. He stays into his work and doesn’t peep out. I walk up the beach path to the boardwalk. The boardwalk stretches across an expanse of dune and dune grass. In the middle is a bench where one can sit. The ocean, still visible and framed by land, is quieted by the distance and song birds and a gentle breeze.

I watch the boy huff his way on the sand toward the boardwalk. He is duck-footed and his heels dig deep into the sand. He is in a hurry. It is getting dark. His bike is casually perched against another small bench. It is a solid, handsome bicycle. Forest green with thick tires and treads.

“I put sticks around it,” he says.

“Oh no. Not like that.” He doesn’t look at me. He jumps on his bike and flies down the boardwalk.

Early the next morning, I meander down with my coffee. The sun rises over the water and blasts straight onto my chest.

He has put short reeds around his project. A little mini-fortress. I peer down. He has dug way down and solved the problem of being able to crawl out by carving three precision steps into the wall.

Every day I see the work-in-progress and the changes that he has made. I peer into the depth and see the beginning of a tunnel. He is now digging horizontally.

On this day, a lifeguard stops by the pit. He swings his legs off his four-wheeler like he is dismounting a horse. He looks down into the hole. I look over at him.

This lifeguard looks much older than the other young bucks that rode by on their patrol buggies and briefly glanced at the hole. This guy is big, bald, and angry. He is either head of the lifeguards or never grew out of the summer-time position.

He looks at me as if I was responsible.

“This is really dangerous,” he says.

“That is why he put sticks around it,” I reply.

“ You wouldn’t believe how many people I have seen get hurt because of holes in the beach. And dogs too.”  I forgot about dogs.

“I’ve seen broken collar bones. Sand is unstable. I grew up around here. I’ve been here all my life. I’ve seen people get trapped and die. Sand is so unstable. Look, I want folks to have fun but this is bad. It isn’t my job to fill in this hole but I can’t pass it by.”

The man pushes the hill of sand into the pit, using his legs.

“People walk on the beach at night. Drunk teenager could fall into this and break his neck easy. See the tunnel. There were these idiots who dug a tunnel to each other, crawled through it, and the sand collapsed. Suffocated. Lifeguards aren’t supposed to fill in these holes but I can’t let it go. Not my job but what I am supposed to do?”

He shovels the sand with his hands, digging backwards like a dog. I push a bit of sand with my leg. It is heavy. I stop.

The man talks the same talk the whole time he is working: Not my job but. He drives his four-wheeler over and over the filled-in hole and leaves, without acknowledging my thanks.

I go to the beach in the early morning, all day long, and into the evening and never see the boy again. Was he real? Did he exist to dig a hole, only to have it filled in?

There’s the big man, lecturing as he stamps down the sand on his beach, and I hate him because he is right, and he knows it. The young boy, digging, knowing the risks, haunts me. I wonder what he will think when he sees his creation covered up. I’m pretty sure the boy will keep busy, heels into the sand, resilient. Unlike me? I wonder and hit submit. 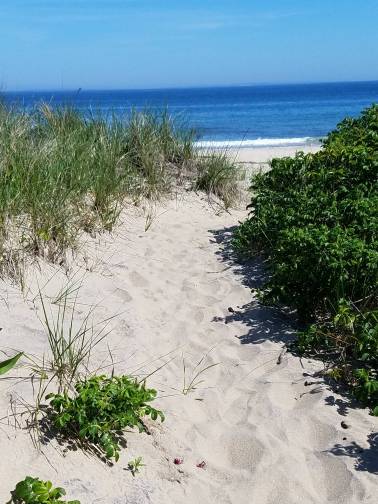